About the NHL Winter Classic 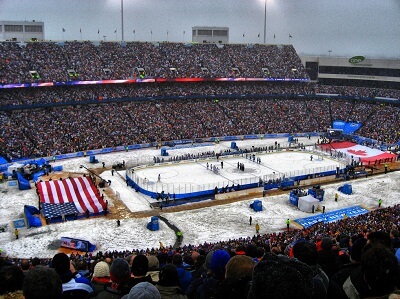 Since 2008, the National Hockey League has put on a truly special event. Each year, usually around New Year’s Day, the NHL schedules a game in an outdoor venue. They have used such places as Ralph Wilson Stadium in Orchard Park, New York; Wrigley Field in Chicago; and Fenway Park in Boston, Massachusetts to host the NHL Winter Classic®.

The first dozen NHL Winter Classics were held in arenas, split six and six between football stadiums and baseball parks. Even the smallest crowds were around 40,000 fans at Wrigley and Fenway. The 2014 game was on campus at the University of Michigan in what college football fans refer to as The Big House.

This massive stadium was packed to capacity with over 100,000 avid hockey fans. The game at Michigan Stadium earned its way into the Guinness World Record book for the most tickets sold to an NHL event. Not only is this a special event for hockey fans to attend, this single game has rivaled the Stanley Cup finals for television ratings.

However, playing hockey outside on a frozen rink is how many fans became endeared to the sport. There is something about watching a game played the way it used to be played when we were kids. Those who have been fortunate enough to get tickets to the NHL Winter Classic, insist it is a lifetime memorable sports experience.

In 2020, the NHL Classic, sponsored by Bridgestone®, will be held on January 1, in Dallas, Texas. The site will be the famous Cotton Bowl. Not only is this massive stadium home to the college football game of the same name, it has been the site of countless special sporting events, including the 1966 NFL Championship game.

The Cotton Bowl has a capacity of 92,100. Since this will be the first NHL Winter Classic in the south, it would wise advice to seek out and secure your tickets very early. If you’re looking for an exciting sports adventure, follow hockey back to its outdoor roots and make your plans to be in Dallas next New Year’s day for the next NHL Classic. Don’t get caught icing – buy your NHL Winter Classic tickets today using the links above so you’re not left out in the cold.

How Much Do Winter Classic Tickets Cost?

The price for Winter Classic tickets ranges from $229 for upper level “nosebleeds” seats, all the way up to nearly $1000 for lower level front row seats.

Final Minute of the “Miracle on Ice”